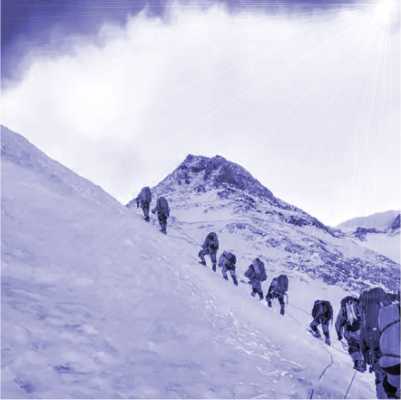 The film Everest, released in 2015, told the story of a group of experienced climbers who scaled the mountain in 1996. At the time there were so many groups climbing to the summit that the different attempts had to be scheduled. There’s a safety rule on Everest that if you don’t reach the summit by 14.00, then you have to turn around and head back to camp before nightfall.  As the different groups ascended, they experienced delays. Although some abandoned their ascent after the allotted time, many other experienced climbers, frustrated by being so close to their goal, continued to the summit. When they descended, bad weather, increasing darkness and altitude sickness led to eight of them dying on the mountain.

This tragic story is an example of what economists call the “sunk-cost bias” which is where we continue with unrecoverable investments and avoid the conflicting evidence of the present. This is what the phrase “throwing good money after bad” refers to.  For instance, a business may invest in a new strategic direction, but then the market environment changes. Instead of adapting to the changed context, the business avoids the evidence and continues on the same path.  A personal example could be when you continue to watch a terrible film until the end because you’ve already sat through the first hour.

We’re always making decisions. One way of describing your situation in this very moment is that it’s the sum of all the different decisions you’ve made in your life up to now: the big ones, like education, career and relationships and the less conscious and habitual ones like checking your email, or deciding what sandwich you’ll have for lunch. When we make decisions, our mind, emotions, feelings, and intuition are involved, but not always consciously. We’re also influenced by external factors that can remain hidden, like cultural norms and advertising. To make good-quality decisions you need to be in the right state. If you’re stressed, anxious, or experiencing strong emotions, then the quality of your decision-making will suffer. So when we make decisions, how aware are we of our thinking, emotions, feelings, intuition and external factors?